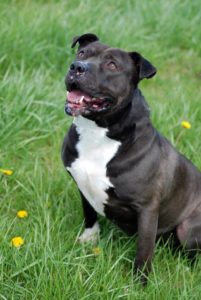 Calvin is a Staffordshire Bull Terrier.  When I met him, he cuddled up on my lap like I had been his mama forever.  You’d think, with his history, that he would have decided to dislike humans a long time ago, but the fact is that Calvin loves pretty much everyone he meets.

Our sweet puppy was originally born to someone who participated in a dog fighting ring.  We never have been able to determine if he was supposed to be a fighting dog or a bait dog, but his face bears evidence of multiple fights.  His lip and face had been torn before his first stay at the rescue shelter in Cincinnati, and they had to repair it as best they could, but he was left with some visible reminders of his terrifying start in life.

After he was rescued, he was found to have heartworms, and so he had to undergo a lengthy and painful treatment.  The medicine given to dogs when they have a heartworm diagnosis is much like chemotherapy, so you can imagine how terrible that would be, particularly for a dog who doesn’t understand why he is being made so sick.  The treatment takes many months to complete.

After he was recovered, he was adopted by a person in Kentucky.  Later, the Owen County Animal Shelter was called to rescue a dog that had been hit by a car, and when they showed up for that dog, they found Calvin and many other dogs living in the home, and not being cared for.  They collected all the dogs and brought them back to their shelter.

Staffies tend to look like short pit-bulls, and Calvin is no different.  He’s a tank of a dog, and his appearance, along with his visible scarring, tended to be off-putting to visitors to the shelter.  Calvin made fast friends with the shelter workers, however, and became one of the favorites among the volunteers. But he just couldn’t find a family who wanted to take him home.  He was left to live in the shelter for more than 8 months… until the day he cuddled on my lap.

When Calvin came to live with us, he had no manners whatsoever. We expected that, with his history, but it was certainly a challenging situation because we have another dog and a couple kids at home.  When Calvin attempted to snatch a ball out of my son’s hand and accidentally bit him, we knew we needed to find a trainer sooner than later.  We had taken our first dog to training at a pet supply store, but we hadn’t been completely happy with the results.  I had heard of Allie’s Walkabout before, and so I decided to contact the trainer that was affiliated with them.  When I first spoke to Jim, he gave me some tips to immediately curb Calvin’s behavior, and we enrolled him into a level 1 training class.

When we first started attending class, Calvin was nearly uncontrollable.  He hated being on a leash, and he hated using a face halter even more.  He was dragging me around the room, running off, and trying to steal treats and toys from other dogs.  Jim was incredibly patient and gave us a lot of encouragement as we began working through some simple training techniques.  Before long, Calvin could sit and pay attention on command.  He learned to wait his turn for treats and toys, and he wasn’t hassling the other dogs.  I had begun to have some hope for him.

It’s been several months, and Calvin is now finishing up his level three training.  He’s successfully passed his Canine Good Citizenship Test, and he’ll be working toward therapy dog training.  He is still the same loving, cuddly dog that we adopted, but so much more well-behaved.  I can take him for walks now, and he doesn’t pull me around. He doesn’t challenge other dogs.  I don’t have to fight with him to get him to listen.  It really is a nearly miraculous change!  Calvin has led an incredibly difficult and painful life thus far.  I’m so happy that he’ll be able, because of his training with Jim, to be able to love and be loved by many people for the rest of it.